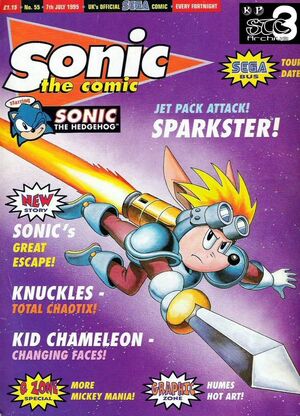 Last of the Rocket Knights is a short story comic published by Fleetway on 7 July, 1995. It was featured prominently alongside the publication of Sonic the Comic and tells a spinoff story based on the events of Sparkster.

The story revolves around Sparkster, who upon returning to Zephyrus finds the place in complete disarray and controlled by the Lizard Army. Upon meeting Princess Sherry he learns King Gedol has placed the entire population under a mind-controlling spell and intends to marry Sherry and become Zephyrus's ruler, so it's up to Sparkster to break the spell and stop Gedol's plans.

Retrieved from "https://rocketknight.fandom.com/wiki/Last_of_the_Rocket_Knights?oldid=5080"
Community content is available under CC-BY-SA unless otherwise noted.